Malcolm X once famously said, “Anytime you find someone more successful than you, especially when you’re both in the same business, you know they are doing something that you aren’t.” While this may seem to be stating the obvious, Germann, Lilien and Rangaswamy set out to apply this theory to marketing analytics with the hypotheses that “the more intense the level of competition among industry participants, the greater the positive impact of marketing analytics deployment on firm performance.”

To explore this theory in the Australian context I set out to look into one of Australia’s most intensely competitive industries, that of FMCG grocery industry and specifically, the ongoing tussle between Coles and Woolworths. Some background for the uninitiated – both Coles and Woolworths are part of a larger group of businesses which include hardware outlets, clothing department stores and liquor stores; they also both operate loyalty cards namely Flybys (Coles) and Woolworths Rewards; and they both offer online shopping and home delivery for their grocery outlets. 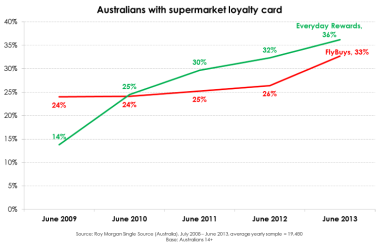 Coles and Woolworths use data analytics from your online purchase history to save lists and streamline your weekly shop, they prompt you at checkout to consider products you usually buy and they promote specials on items you have previously ordered. In an interview with itnews.com.au last year, Coles digital chief Roger Sniezek insists that the use of data collected from online purchases and loyalty cards is about improved customer service, not about upselling. “If you go back 100 years to George Coles, I’m sure at the end of unpacking a cart he might have said ‘I think you may have forgotten the milk this week’,” Sniezek explains, “Now, when you come to check out on Coles online, using a few computers in the background we will also suggest a few things that we think you may have forgotten.”

Germann et al assert that the successful use of marketing analytics is only possible with buy-in from the Top Management Team, it appears this is no issue with Coles and Woolworths who are well aware of the power of data. In fact, The Australian report that Woolworths recently purchased a 50 % interest in data analytics company Quantium which enables them to use the firm’s data, analytical, media and software services to boost their existing customer analytics. Yet this is where the waters get a little muddied, in return for use of their data software services Quantium gain access to Woolworths’ de-identified customer data, taken from its loyalty, debit and credit cards, which may be processed and sold to Quantium clients including eBay, Telstra and Qantas.

In fact, independent consumer group Choice, point out that the loyalty cards promoted by these large conglomerates are not about rewarding customers after all – shock, horror! Their evaluation of a range of rewards programs found that most offered ‘such poor rewards that you generally save less than a dollar per $100 spent’ and in return consumers are imparting invaluable information such as whether they are a smoker, purchase a lot of junk food or perhaps maternity-specific products. Why is this a big deal? If, as the ABC’s 7:30 Report suggested, Coles and Woolworths are engaged in high-level discussions about establishing banks and offering home loans, then an individual’s financial situation, purchase history and lifestyle will provide them with invaluable tools for lending risk assessment.

So, while Germann et al profess the importance of getting top-level management buy-in and appreciating what marketing analytics can do for a firm in competitive environment, we can also observe what intense competition can do to an industry and their key players. We can appreciate not only the ‘positive impact’ that market analytics can have on a ‘firm’s performance’ but also the risk that placing data at the core of competition can hold for consumers.

7 thoughts on “Data as weaponry in the Supermarket Wars”